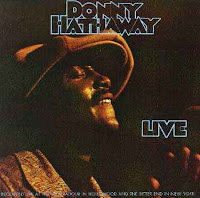 Every week, Brooklyn Music will post a review of an old album retrieved from the depths of Brooklyn's abundant – if increasingly obsolete – record stores. This is the inaugural post.

Best remembered for his series of hit duets with Roberta Flack, Donny Hathaway was a man of multifarious talent. Before embarking on a singing career in his own right, he was a prolific arranger and producer, primarily working out of Chicago for Curtis Mayfield's Curtom Records. Some freelance work for Aretha Franklin had introduced him to Jerry Wexler of Atlantic Records (who would later write about the musician’s numerous eccentricities, including his penchant for French serialist composers, in his memoir Rhythm and the Blues); shortly thereafter, he signed Hathaway in yet another attempt to fill the massive void left by Otis Redding’s death in 1967. (Redding’s initial heir apparent, James Carr, was notorious for his alcoholism and schizophrenic behavior.) Although he never enjoyed Redding’s mainstream crossover success, Hathaway was a formidable presence on the R&B charts in the early seventies – as a solo performer with “The Ghetto” and in collaboration with Flack – while his stage show rivaled the departed master’s revue in sheer tenacity. Hathaway’s inimitable stylings on the Fender Rhodes electric piano would have a pervasive impact on funk, fusion, and disco productions of the decade, establishing a sonic counterpart to the wah pedal.

Recorded at the Bitter End in the Village sometime in 1971, Donny Hathaway Live finds the singer using the stage as an alembic, transforming what could have been a perfunctory greatest hits show into a jazz-influenced workout. A cover of “Jealous Guy” matches Bryan Ferry’s, and a 13 minute excursion into “The Ghetto” is a touchstone for the increasingly rhythmic sounds that were to follow in the decade. Indeed, artists as diverse as India.Arie and Stevie Wonder have cited the album as an influence.

Hathaway committed suicide at Midtown’s posh Essex House hotel while on the comeback trail in 1979. But his legacy lives on in samples, reissues, and the occasional slab of old vinyl.
Posted by Sean Murphy at 11:45 AM