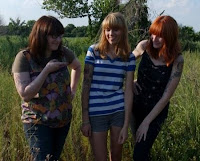 Since appearing on the scene early last year, Brooklyn-based trio Vivian Girls has enjoyed mammoth success hitherto unseen by most local groups. After appearing for all of three minutes in January 2008, their eponymously titled debut (one of the year’s shortest at about 22 minutes) was the subject of rampant price gouging on eBay; this situation was ameilorated somewhat when major-league indie In The Red Records re-released the album to a second wave of rave reviews (including a coveted 8.5 on tres-chic tastemaker pitchfork.com) in October. Music Junkie covered a contemporaneous show in support of the album at the Silent Barn in Ridgewood, and the ebullience projected by these three women was palpable throughout the entire room – a rarity these days. Rather than shunning the threat of “selling out”, they embraced it… and were arguably all the better for it.

So it should come as no surprise that the Vivs have no intention of being a one-hit fluke. On September 8th, In The Red will release the band’s (35 minute!) sophomore album, the evocatively-titled Everything Goes Wrong. Recording took place on the Left Coast over six days earlier this year, doubling the recording time allocated for the debut. According to Cassie Ramone, the band’s guitarist, “Last time, the album was really rushed. We were just go, go, go, go. And now we’re taking our time with every step of the process, making sure we’re really happy with everything before we move on.” With a Martian desert landscape supplanting the Brooklyn skyline as the album’s cover, expect a different vibe – more melodic, a la standout tracks “Where Do You Run To” and “Tell The World” – than the shrill cacaphony of their beginnings.

After touring for a while and generally neglecting the Brooklyn concert venues that they once played on a weekly basis, the band will make their triumphant return as part of Todd P.’s Captured Tracks Festival at the 970 Broadway Backyard in Bushwick on July 4th. Catch the Vivian Girls alongside likeminded bands The Oh Sees, Woods, and Dum Dum Girls, and dig their frayed melodicism.
Posted by Sean Murphy at 9:48 AM