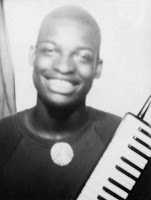 As the world mourns the passing of madcap free jazz drummer Rashied Ali, it is important to note that Ali's legacy extends far beyond the sonic pyrotechnics of Ascension and New Directions in Jazz Music. Long after his halcyon days in the mid-sixties, the prolific Ali continued to champion musicians of the same iconoclastic pedigree as John Coltrane and James "Blood" Ulmer. Among the less fortuitous of these collaborators was Bed-Stuy native Arthur Rhames, a fusion prodigy whose intermittent career and rampant egotism belied a talent that, in Ali's estimation, was on par with the "greatest musicians God ever put on this Earth." Today, Rhames' imprimatur is the stuff of forgotten indie labels and luminiferous memories, but his recondite profile has cast a towering shadow among the cognoscenti well into the 2000s: Vernon Reid of Living Colour described Rhames' guitar style (he also played tenor sax and melodica to rapturous acclaim) as "frightening" in an interview conducted three years after the musician died of AIDS complications in 1989, and even the laconic Bill Frisell cited Rhames as an "overwhelming" presence, adding that he had "never seen the guitar played that way." Like another multi-instrumentalist named Arthur who helped to define the epoch, minimalist composer/dance auteur Arthur Russell, Rhames' output was uniquely variegated, a jarring confluence of influences that ranged from his Hare Krishna faith (he was a regular at the Krishna temple at 439 Henry Street in Cobble Hill, a brisk fifteen-to-twenty minute walk from the Eagle's offices) to R&B to free jazz to the stentorian excesses of Mahavishnu Orchestra. As such, it's hardly surprising that this style only became germane to record company scouts in the wake of his untimely death -- when drummer and steadfast collaborator Charles Telerant mentioned that he had played with Rhames to Brian Bachhus of Verve Records, the A&R executive offered to sign the enigmatic local legend to a career-making deal on the spot -- an offer that was rescinded when Telerant informed him that Rhames had been deceased for three weeks.

Garnering his initial reputation (ballasted by a profile in Guitar World) as the pubescent guitarist with local jazz-funk trio Eternity, "the Brooklyn Flash" embraced the jazz orthodoxy in his early twenties, busking frequently in Union Square in various permutations with Telerant and a trio configuration that included pianist John Esposito and Jeff Siegel on drums. The few recordings of Rhames from this era, collected on a tribute album recorded with Ali (The Dynamic Duo Remember Trane and Bird) and a lone live album (Live from Soundscape) find him increasingly dependent upon the tenor saxophone and emulating Coltrane's late-period deconstructionism (the Trio's microtonal take on "I Got Rhythm" from Soundscape is a competent demonstration of this approach). In 1984, Rhames (credited as "Butch") contributed pedestrian guitar and keyboards to Positive Power by Steve Arrington's Hall of Fame, an obscure boogie-disco effort.

Rhames remains an elusive figure even in jazz circles, but a reappraisal seems to be on the horizon. An official website showcases scintillating rock fretwork from his Eternity days and highlights from the the mellifluous jazz recordings that eventually manifested, while an unreleased duo album with Telerant was recently released to favorable notices.

Ego considerations notwithstanding, it's difficult to ascertain why Rhames failed to attain even a modicum of success in the insular world of jazz. As an instrumentalist, his crossover appeal to pop audiences was limited at best; moreover, as an African-American gay man who refused to compromise with the duplicity of the music industry, he may have simply been too ahead of his time.
Posted by Sean Murphy at 2:27 PM