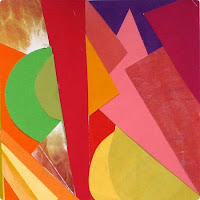 Neon Indian have yet to release an album, but you wouldn't know that from the hyperbolic plaudits that can be found in Rolling Stone and recent Pitchfork posts. Comprised of Austin-via-suburban Dallas auteur Alan Palomo (best known for his work with Ghosthustler, perhaps the only group in recent history to make it on an MTV channel without releasing a single album) and Brooklyn-based video artist Alicia Scardetta, the band stands on the putative forefront of the nascent "chillwave" movement -- which, for all the furrowed eyebrows out there, is a mediaspeak descriptor for post-MGMT electro/psychedelic rock that will likely enter the popular vernacular for about three minutes in October (c.f. new rave, freak folk). This is probably a good thing, as Palomo and Scardetta are actually pioneering a new -- and most unclassifiable -- metier equally informed by avant-garde art, saccharine pop, the backwoods breakbeats of Black Moth Super Rainbow, and the enduring legacy of such quintessentially Texan mavericks as Roky Erickson. Spurious hype notwithstanding, they are the real thing.

With a paucity of good summer songs this year (Pitbull's "Calle Ocho" was on the radio in March here in New York, while the apocalyptic, timorous "Voodoo City" by YACHT evoked visions of William Burroughs on the beach), Neon Indian have stepped improbably into the void with "Deadbeat Summer". Over a bed of detuned synthesizers and heavily processed lo-fi guitars, Palomo murmurs vacuous lyrics (a la Michael Stipe circa 1983) before concluding that "it's like a deadbeat summer". The bass and drums may lack the "momentum" discerned by Pitchfork's reviewer -- indeed, the beat is more comparable to a hip-hop or left field dub reggae production than anything by Gary Numan or the Human League -- but for those of us who have been looking to replace "Genius of Love" with a contemporary song on our summer mix CDs for some time now, this will certainly suffice.

Psychic Chasms, their first full length release (at 30 minutes, it's been alternatively described as an EP and an album... go figure), is due on October 13th. Until then, sate your taste for the new sound by downloading "Deadbeat Summer" for free at Prefix magazine's website.
Posted by Sean Murphy at 10:10 AM