A relatively quiet week, as to be expected during the dog days of August. Still, there are a couple of interesting live choices for your perusal. 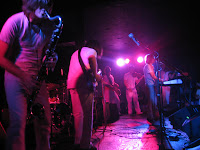 Having toured with the likes of Beck, Islands frontman Nick Thorbun is a spiritual cousin of funk/folk/hip-hop eclectic, producing a prolific stream of albums over the past decade that fall under such unlikely rubrics as folk and progressive rock. A must-see.

Although they've been unfairly pigeonholed over the years as everyone's favorite socially conscious and openly lesbian folk-rock duo, the Indigo Girls have put out several pleasant records over the years. Performing songs from such solo efforts as Didn't It Feel Kinder (and maybe "Closer to Fine"), Amy Ray will renew -- or restore -- your faith in singer/songwriters.
Posted by Sean Murphy at 2:36 PM