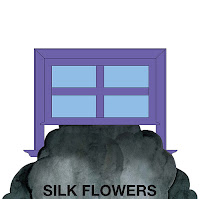 Multifariousness will likely define the musical legacy of the 2000s; as a friend remarked recently, the postmodern bricolage of Beck's Odelay was so far ahead of its time in 1996 that no one could have possibly anticipated the influence of that aesthetic. Yet this genre-spanning amenability came at the sacrifice of several longstanding forms, and whether you want to chalk it up to Bush-era hubris or the transition of musical breeding grounds from the dishabille of suburban basements to Five Colleges gravitas, the goth is as blithely anachronistic as shoulder pads at the cusp of the 2010s. From what I've seen, Aviram Cohen, Ethan Swan, and Peter Schuette do not take their lyrical cues from Robert Smith or Ian Curtis, but their debut album -- released concurrently with Quentin Tarantino's likely-misbegotten comeback attempt Inglorious Basterds -- is something of a distant cousin of that director's oeuvre on the surface; while Cohen and company may never be partial to black eyeliner and bondage pants, the pastiche element (channeling and reconstituting the usual touchstones of Closer, Flowers of Romance, Mask, a tinge of 20 Jazz Funk Greats, and -- duh -- Pornography) is almost too cloying to fathom at times.

Ever so occasionally, however, the specious kind of pastiche that has been inculcated to us in overt and not-so-overt ways by the trepidatious postmodern hegemony over the past forty years can be successfully subverted -- witness the Astaire-meets-They Live By Night lunacy of Pierrot le fou -- and that is precisely what this Brooklyn-based trio does here. While the Curtis-on-helium vocals that permeate about half the tracks lend the proceedings an air of inveterate studiousness, other tracks (the mostly instrumental "Costume", "Shadows in Daylight") are suffused with decadent Teutonic-via-"Let's Go to Bed" synthesizers and loping drums that suggest a repudiation of the past. The arrythmic, distorted drum machines (one of those counterintuitive textural innovations rarely touched upon since Mtume's mid-70s stint with the Miles Davis) of "Night Shades" will mollify contemporary Brooklyn audiences, but it also hints at their far-reaching potential.

It is only inevitable that the Brooklyn scene will soon produce a Music from Big Pink or There's A Riot Goin' On for the disaffected masses of Generation Y, a musical conflagration of past and future that will lead to yet another paradigm shift in popular music. Silk Flowers is a taste of that looming change, and a subtle reminder that the best is yet to come.
Posted by Sean Murphy at 11:38 AM