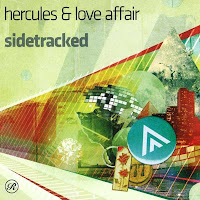 By and large, 2009 has been a transitional year for dance music. Tired of the solipsism of the electro scene (epitomized by A Cross The Universe, Justice's snooty travelogue of a documentary), critics none well versed in the mythopoeia of the groove have posited that everything from UK funky (the latest -- and well executed -- British regurgitation of early 90s diva house) to the all-too-spare strains of dubstep will mark the next paradigm shift in the genre. But throughout it all, Brooklyn-based producer Andy Butler has remained consistently prolific, recording several singles (and one album) under the Hercules and Love Affair moniker that defy ready categorization. Expropriating the walking bass lines that are all but metonymous with disco sleaze, Arthur Russell's Cageian horn arrangements, and the musique maudite of Antony Hegarty, Butler has arrived at a sound that is irrefragable proof of the idiom's continued evolution. With no less of an authority than Frankie Knuckles (the New York disco/Chicago house pioneer) having produced a remix of the hit "Blind", one can't help but feel that Butler -- who, like many of the genre's initial factotums, is openly gay and not averse to a good lyric -- has revitalized what was a moribund tradition.

Tying together 70s underground disco faves Dr. Buzzard's Original Savannah Band, Gino Soccio, local upstarts In Flagranti, the early avant-dance revivalist Danny Wang, Todd Terry's epochal cover of Phreek's "Weekend", and the new Hercules single ("I Can't Wait", five minutes of truly sybaritic fun) into a cohesive whole, Sidetracked is an exhilarating mix -- so exhilarating that Butler's nuanced segues may keep you from hitting the dance floor altogether. An inveterate and relentless crate-digger, Butler's choices lend the anthology a gravitas far beyond the years of its compiler. While his three-minute deconstruction of "Weekend" (taken from the relatively rare "Retouched by the Hand of Todd" club mix, not the overplayed, hip-hop influenced radio edit) will probably not garner the DJ any new fans, the Buzzard and Ray Martinez cuts will surely bemuse the contemporary generation of banger-reared hipsters. The absence of "Grand Central Shuttle" is conspicuous, but as a subversive exercise and a party album, Sidetracked succeeds on all counts.
Posted by Sean Murphy at 9:06 AM