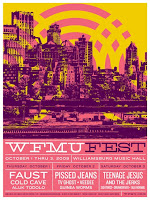 If you've experienced the misfortune of a long automobile ride lately, you'll know that many of New York's corporate radio stations can grow a tad irksome after about twenty minutes. For those of us who are too impecunious for satellite radio and can't depend upon FM-powered iPod docks in the five boroughs, independent station WFMU (91.1, 90.1 for Hudson Valley readers) is something of a lifesaver, broadcasting an irreverent mix of contemporary indie, rare groove, 50s honky tonk, Duke Ellington, sleazy garage sides, and just about anything else you could possibly imagine. They also host the already-venerable Free Music Archive, dole out concert tickets on Twitter, and sponsor a pretty groovy record fair every year. Don't let the "station whose name has become like a secret handshake among a certain tastemaking cognoscenti" appellation throw you off -- Hot 97 and Q104.3 just pale in comparison.

A month from now, the Jersey City-based station will be coming to Brooklyn with the inaugural WFMU Fest. As the concert market bottoms out, seminal no wavers Teenage Jesus & the Jerks (featuring the inimitable Lydia Lunch) will be headlining the final concert on October 3rd. Esoterics will also delight in a rare performance on October 1st by Wumme's finest exports -- Faust. Coalescing around the same scene that included such Teutonic perennials as Kraftwerk, Neu!, Amon Duul II, Ash Ra Tempel, and Cluster, they were the first to cross over to an international audience; The Faust Tapes, reissued by the incipient, pre-jetliner Virgin Records, sold over 100,000 copies in Britain. Neophytes should check out Outside the Dream Syndicate, a collaboration with LaMonte Young associate/composer/filmmaker Tony Conrad; it is one of the first extant examples of interdisciplinary musical minimalism, presaging the fusion recordings of Peter Gordon, Arthur Russell, and Laurie Anderson by several years. Budget-conscious listeners may want to consider the $12 October 2nd show, featuring Allentown grunge revivalists (we're not kidding) Pissed Jeans.

For more info, click here.
Posted by Sean Murphy at 8:11 AM