Following in the ribald, insouciant British folk-rock tradition of Roy Harper and Steeleye Span, Edward Sharpe and the Magnetic Zeros (who, I should add, are very American) have earned plaudits from the L.A. Times for their "big, open-hearted anthems". Sharpe (nee Alex Ebert of dance-punk lodestars Ima Robot) is known for baring his chest and feet onstage, but with stagecraft not a priority for many of today's groups, there's no need to begrudge him. The equally singular Preacher in the Knife borrow equally from Nick Cave and calypso, making this show one of the bargains of the month. 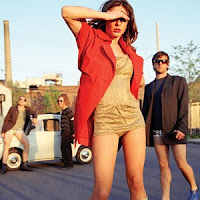 The Brazilian Girls' polyglot lyrics and tropicalia-cum-Left Bank aesthetic have earned them celebrity fans (David Byrne) and a coveted spot on Verve Records; nevertheless, as critic Nitsuh Abebe astutely noted over three years ago, "They have fans, yes-- devoted ones-- but there's no coherent market for them to aim at. They have their swank global groove, but they're too arty to home in on worldbeat fans or VIP loungers. They make freethinking dance music, but their grooves are too earthy to count on the electronic crowd, and they're too upscale, too going-out-music, to count on rock geeks." With Brazilian Girls Sound System, bassist Jesse Murphy (who is also playing a solo set) and drummer Aaron Johnson are valiantly attempting to strip away the artiness with musicians from the John Scofield Band, the Saturday Night Live house band (weird enough)... and, most quizzically of all, Paul Ryder from the Happy Mondays (not the more logical -- and temperamental -- Shaun). Interesting, at the very least.

Playing on a bill as perfectly complementary as coffee and pie, Titus Andronicus' avant-Springsteen theatrics culminated in The Airing of Grievances, one of last year's best rock albums. Meanwhile, Bay Ridge outcasts the So So Glos -- arguably better known for their role in the formation of the Market Hotel than any of the music they've produced -- are the long-prophesied American answer to The Clash, infusing indie with the timeless kind of despondent heart and soul that will leave you spinning Tourist/Terrorism over and over again. Meanwhile, Chicago's Smith Westerns bridge both approaches with garage-y fulminations on the usual adolescent frustrations.
Posted by Sean Murphy at 9:47 AM