Clay Cole and the Paramount Theater 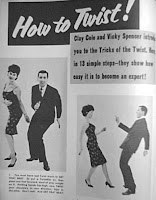 Although this blog is mainly geared towards contemporary music, one would be remiss in dismissing Brooklyn's storied musical heritage. Long before the borough's ascendancy in the popular eye of the 2000s, the Paramount Theater -- located at the intersection of Flatbush and DeKalb Avenues on the border between Fort Greene and the downtown district -- served as the premier venue for three generations of pop acts in a reign that spanned the jazz and rock eras. From a celebrated Duke Ellington performance in 1931 to Miles Davis's flippantly cool jazz to the theater's halcyon days in the late Fifties, when Little Richard and Chuck Berry regaled northern audiences with their provocative fusion of country and R&B music, the Paramount was nothing less than a microcosm of the pop charts. Alas, all good things must come to an end, and 47 years ago this August 23rd (as per Eagle historian John Manbeck), the redoubtable theater closed, having been purchased by Long Island University in 1960 as the cornerstone of their Brooklyn campus. (Soul progenitor Jackie Wilson, "Mr. Excitement" himself, was the final performer.) Although the 4,124-seat Paramount was equipped with full theatrical facilities, films were the bread and butter of the theater's profits; as ticket sales began to be eclipsed by television, the behemoth movie palaces of yesteryear simply couldn't compete with the new medium.

After a legendary payola scandal destroyed the career of rock and roll factotum Alan Freed in 1958, Clay Cole stepped into the void as one of New York's most recognizable musical ambassadors. Described as a more urbane version of American Bandstand and the Buddy Deane Show (the inspiration for Hairspray), the Clay Cole Show introduced audiences to Chubby Checker (who first performed "The Twist" on the program), Brooklyn's own Neil Diamond, and late comedians George Carlin & Richard Pryor in their pre-countercultural incarnations. Cole also took over promotional duties at the Paramount, with his ten-day 1960 Christmas spectacular breaking the venue's all-time box office record. It would not be an understatement to say that Cole played an integral role in keeping the nascent flames of rock and soul alive when so many of their initial exponents had been neutralized.
Disenchanted with psychedelia, Cole left the music business in 1968 to pursue a behind-the-scenes career as an Emmy-winning director of television specials. Although he has retired to North Carolina, Cole returned to Brooklyn this past March for a symposium and revival show honoring the Paramount Theater at Long Island University (while the theater now functions as the university's gymnasium, enough of the original structure -- including the cherished Wurlitzer organ -- has been preserved to allow for occasional concerts featuring many of the same performers who played there 50 years ago). And, most intriguingly of all, the former impresario is releasing his memoir -- Sh-Boom! The Explosion of Rock 'n' Roll (1953-1968) -- this October. If the accompanying publicity is any indication, local fans can expect plenty of Paramount stories in this essential addition to the body of rock literature.
Posted by Sean Murphy at 11:33 AM