Review: Everything Goes Wrong by the Vivian Girls 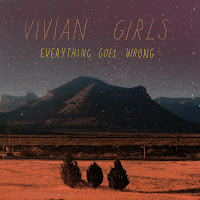 For anyone who still harbors the steadfast convictions that dance music is only for louche trendoids at pickup joints and the exigency of hip-hop only manifests in an ironic – and slightly dated – context, the Vivian Girls represent nothing less than a paradigm shift in popular music. For anyone who has long succumbed to the Bacchanalian thrall of the dance floor and forsook Guided by Voices for Talib Kweli a long time ago, the Vivian Girls still represent a paradigm shift in popular music. While we can safely assert on the cusp of the 2010s that rock and roll – that peculiar leviathan borne from backwoods cross-fertilization that, like any form of vernacular music in good standing, won’t go away any time soon – has experienced an unforeseen and incredible renascence over the past ten years, feral vitality has been subsumed by the brutal ardor of the conservatory.

As early as 1969, even a Bozo boor like Jim Morrison could definitively proclaim that “rock is dead” and foresee the rapid proliferation of what were then quaintly known as tape machines; within half a decade, “Autobahn” and “Love to Love You Baby” fulfilled the mandate of the lead Door’s prognostication with flying colors. The reactionary torrents of punk and some of its derivatives notwithstanding, contemporary pop is a process in enumerating upon those templates, arguably culminating in the spazzed-out bliss of pre-808s Kanye and the psych-funk furor of Ratatat and Black Moth Super Rainbow. Tellingly, when some of the working-class rapscallions of Britain’s housing estates took to more artistic inclinations in the early 00s, it was speed garage – a frantic variant of drum and bass – that served as the direct antecedent for their grimy experiments. While Dave Longstreth and Ezra Koeing are very talented individuals and seemingly genial guys, their relationship to Jerry Lee and Carl Perkins is tangential at best. Like Cleopatra and Funny Girl, the manifestos of the contemporary rock renaissance are aurally arresting but have no substance – nada, kids. Rock (irrespective of the divisive indie/corporate divide… you say bad, I say worse) has entered its Getz/Brubeck era of conscious obsolescence and avaricious omniscience. This is not to say that what Longstreth and company are doing is unlistenable (Grizzly Bear’s “Two Weeks” will be a standard on par with “Ipanema” or “Take Five” in fifty years, just wait and see) or entirely duplicitous (they’re using rock instrumentation, after all), but it’s deserving of a new sobriquet.

Everything Goes Wrong is the title of one of filmmaker Seijun Suzuki’s better efforts, and if Japan’s answer to Russ Meyer ever deigned to strap on an electric guitar and write 36 minutes worth of three-chord rock and roll, it would probably sound something like this. Having moved from the postindustrial milieu of the Brooklyn DIY circuit to the Plasticine depths of Los Angeles myriad freeways, the Vivian Girls have managed to channel that city’s deleterious energy into something greater than the sum of its – or their – parts. From Ali Koehler’s jazzy (and utterly taut) drumming to Cassie Ramone’s assured (and almost decipherable) vocals, the Vivian Girls have lived up to the nihilistic promise of “Such a Joke” and “Where Do You Run To”. As the titles of “Tension”, “The End”, and the epic “Double Vision” (dig Ramone’s primitive, Neil Young-via-Kevin Shields fretwork), they’ve extended their lyrical purview to more transcendental and universal concerns in a way that would make Durrell and Nin furrow their eyebrows in despair. This is a hulking piece of licentious, incendiary riffage: an off-white nexus where the scene’s prevailing Ivy aridity meets Faulknerian ramshackle bombast in a dual to the death, with the latter camp ballasted by Kickball Katy’s William Calley bass.

Nearly three decades ago, The Minutemen, Husker Du, and – most lamentably of all – The Replacements descended into modest pedantry, unable to reconcile their baser concerns with the scepter of maturity. As the Vivian Girls have ably demonstrated, you can have your cake, eat it too, and somehow beat your more recondite peers to the finish line. As for this album’s relevancy to the future of rock and roll and pop music in general? As the great Paul Nelson once ruminated, it “defines it, expands it, explodes it. Burns it to the ground.”