The Mighty Sparrow (and Sean Paul) come to Brooklyn 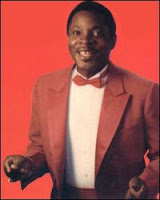 Much as the Tammany Hall machine once wooed prospective supporters with riotous block parties during its late nineteenth century heyday, Marty Markowitz has all but secured my vote this year with his strident dedication to the arts. Over the past two years, Markowitz-sponsored neighborhood music festivals (like Coney Island's Seaside Summer Concerts) have brought Brian Wilson, John Sebastian, Donna Summer, and Blondie (the latter two in the coming weeks) to Brooklyn... gratis. This is a far cry from my childhood a mere decade ago, when events of the same pedigree seemed to be the perpetual stalking grounds of cover bands and doo-wop groups that may or may not have featured the original members. (While I will readily concede that some vocal groups have aged gracefully and the "tribute band" moniker should not be equated with censoriousness, the exceptions are far outnumbered by the middling masses.)

Occassionally, Marty's cadre of programmers will hit a homer so far out of the park that the increasing vicissitudes of life in the city become immediately worthwhile. This is exemplified by Caribbean Night -- the capstone concert of the Martin Luther King Concert Series at Wingate Field in Crown Heights on August 24th -- which, as part of a time-honored borough tradition, will feature the 74 year old (and thoroughly inimitable) Mighty Sparrow.

Although Harry Belafonte was anointed as the King of Calypso after his mammoth popular successes in the 1950s, the actor/singer/activist was naturally reticent to accept the title. Throughout the Caribbean, the Grenada-born Sparrow (who grew up in Trinidad and has spent considerable time in Queens) has defined the idiom for generations of fans. Blending effusive lyrics that touch upon social commentary and more ribald matters to beats and horn arrangements that presaged funk, the music of Sparrow (nee Slinger Francisco) was -- and is -- a hedonistic, intransigent antithesis to the catholic interpretations of Belefonte; in the process, he has embraced more contemporary styles such as soca. (Indeed, Sparrow last won the prestigious Carnival Road March music prize in 1984, well into his fifties.) Briefly signed to RCA at the behest of Belafonte in the late 50s, Sparrow's extemporizations -- evoking, according to Robert Christgau, "African roots, interracial revenge, interracial sex, male-female relations, and cannibalism" -- failed to resonate with a Middle America already bedraggled by the exotica of early rock and roll, and the calypsonian promptly retreated to Britain.

One of the more ardent champions of Sparrow's oeuvre was Van Dyke Parks, the diminutive songwriter best known for his collaborations with Brian Wilson and the 1968 commercial folly Song Cycle. Parks's follow-up to Song Cycle, the beguiling Discover America (1972) was a de facto tribute to the singer and his cohorts (including the irascible Lord Kitchener), with Parks covering the whimsical "Jack Palance". Their connection culminated in 1974's Hot and Sweet, a seldom-heard Sparrow album produced by Parks that stands as one of my most coveted albums. (Does anyone have a copy?)

Sparrow is opening for dancehall sensation Sean Paul, but it would be a disservice to your musical palette if you failed to experience him in the flesh. And as its a free show, why not?
Posted by Sean Murphy at 5:09 PM