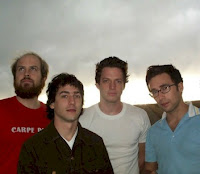 Since the late 80s, Tribeca's Knitting Factory has hosted postminimalist composers like Elodie Lauten and Arthur Russell, my friends in the Mighty Handful (who recently broke up due to the usual extenuating circumstances), Allen Ginsberg (who read his Selected Poems in a celebrated five-night engagement mere months before his death), scores of ska bands, Sixties commune ensemble YaHoWah 13, and even esteemed academic/Hudson Valley folk legend Harry Stoneback. It's the kind of curatorial diversity that you seldom see at Brooklyn shows these days, which is what makes the venue's upcoming move to Williamsburg so exciting.

After months of anticipation that built to a crescendo when the So So Glos announced a performance in their fall tour itinerary, it appears that local indie rock veterans Les Savy Fav are christening the new space on September 9th. One of the few groups anthologized on the seminal This Is Next Year: A Brooklyn-Based Compilation (2001) that are still active, "beardo" (as per his Pitchfork TV show) Tim Harrington's merry band of understated musicians are nothing less than a living history of local alternative music at this juncture. From the anarchic post-hardcore of early efforts like 3/5 to the dance-inflected art punk of 2007's Let's Stay Friends, they've always been ahead of the trends. Don't miss this.
Posted by Sean Murphy at 11:59 PM