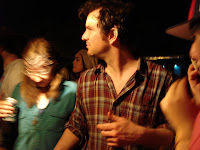 When someone writes the definitive chronicle of the 2000s Brooklyn music explosion in fifteen to twenty years, promoter Todd Patrick will stand in the foreground as one of its most integral -- and humble -- scenemakers. The idea of putting on a semi-illicit $5 show with unknown artists in desolate industrial spaces almost reeks of cliche in music geek circles, but through a mixture of equanimity (there's no clear "Todd P." or "Brooklyn sound" a la the San Francisco bands championed by Bill Graham forty years ago, even if his programming leans closer to noise rock than dance music) and Teutonic precision (see the man running around a venue thirty minutes before showtime and you'll wonder why he isn't working for Goldman Sachs, a decided lack of business acumen notwithstanding), he's made underground music palatable to the mainstream -- or at the very least, the higher-browed culturati.

While this NPR profile of the man is hardly revelatory, there is one interesting tidbit -- after years of summonses, increasing visibility and last-minute show changes, Todd P. is opening a "fully legit rock club" in the fall. No word on where the venue will be, but with the Knitting Factory finally completing their move across the East River in a couple weeks, expect much in the way of good local live music throughout the winter.
Posted by Sean Murphy at 9:23 AM