The Coolest Tribute Band Ever? 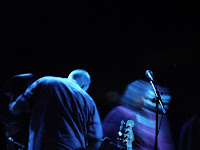 The metier of tribute bands, odd exceptions like Lez Zeppelin notwithstanding, is usually characterized by off-key vocals, carefree unprofessionalism, and rushed tempos -- everything you didn't love about the original group. But while they are nominal exponents of that crowd, you probably won't find Arthur's Landing butchering 70s rock hits at a bar anytime soon. Comprised of nearly all of the musicians who collaborated with downtown composer/disco artist Arthur Russell in his multi-faceted career -- including such notables as Modern Lovers bassist Ernie Brooks, Allen Ginsberg acolyte/performance artist Steven Hall, and fellow composer/trombonist Peter Zummo -- the loose collective of musicians has played a myriad of venues in recent months, ranging from the Issue Project Room in Gowanus to the Diesel store in Manhattan. (An insouciant type who loved ABBA and placed koala bear iconography on his records, Russell probably would have approved of the latter venue.) Even though the composer always divvied up his stable of collaborators while recording -- the patrician Brooks almost never played on Russell's dance records, while percussionist Mustafa Ahmed isn't audible on the folk-rock recordings that graced last year's posthumous Love is Overtaking Me -- the repertoire of Arthur's Landing is strangely holistic, ranging from the unreleased "It's a Boy" to the classic dance hit "Is It All Over My Face" (check out this performance with Nomi of Herclues & Love Affair on YouTube).

According to their MySpace, the group is releasing a re-recording of the latter track (titled "Love Dancing" after the original version of the song) featuring the vocal talents of Nomi and Xavier (and produced by local leftfield DJ Brennan Green) this fall. In the interim, you can catch them with Xavier at Williamsburg's Zebulon (258 Wythe Av.) tomorrow night at 10 PM. In addition to all of the usual suspects, it wouldn't be surprising if a special guest (such as Elodie Lauten, who occasionally gigs with the group) is among their ranks.
Posted by Sean Murphy at 8:47 AM