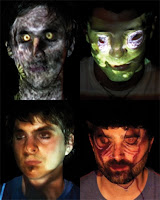 In a 1981 interview with Geraldo Rivera, Jerry Garcia astutely compared the legions of Deadheads to licorice eaters. "Our audience is like people who like licorice," he said. "Not everybody likes licorice, but the people who like licorice really like licorice." The same could be said for Animal Collective, the Baltimore-born and locally-based musical confederation (as witnessed by guitarist Josh Dibb's indefinite hiatus from the group, they can hardly be thought of as a band in the traditional sense) who have captivated mainstream audiences and the cognoscenti alike since releasing the acclaimed Merriweather Post Pavilion -- either their magnum opus or the summit of popular music's decline into irrelevancy, depending upon your perspective -- back in January. More than any other group under the "indie" aegis, the members of Animal Collective are fundamentally outre, an affront to the coldly calculated and expertly manicured veneer of the hipster epoch; in other words, they're kind of like those prematurely hirsute guys who were never invited to the society parties in high school and probably spent their earnings from RadioShack on copious amounts of certain flowering buds. Or, more reductively, they never set out to be hip, even as the urban vanguard latched on to them with unexpected aplomb. Just as the Dead remained relatively static and complacent in their ways as their instrumentation evolved, it's difficult to envision the cogent quartet doing anything differently in fifteen years -- even as a new generation of not-so-impecunious students and dreamers follow them on tour.

Saturday's concert -- marking the end of the 2009 Celebrate Brooklyn season -- was an exercise in contrasts. Young families frolicked with each other on the lawn; an aging Park Slope rocker and his Bay Ridge companion (the accent and her gushing admiration for Vesuvio's were the giveaways) downed Rocher chocolates by the box, demonstrating that the two rival nabes will indeed live in harmony someday; and yes, plenty of my not-so-impecunious peers were there, searching in vain for a party scene that never quite manifested amid the electronics and copious pot smoke. While the beat was crucial to Merriweather Post Pavillion's hits ("Brothersport" and "My Girls"), AC's roots in freak folk and the Beach Boys' psychedelic era have continually precluded them from indulging in anything close to a four-on-the-four rhythm, and Saturday's set maintained that contrarian tradition. While a select number of pop visionaries (Wilson, Perry, Eno, Russell) foresaw the dissipation of the beat into spatial luminescence, Animal Collective's rapid ascent into the collective unconsciousness has expedited this process overnight -- no small feat.

After a set of disco standards ("Make Me Believe in You", "Cymande") from XXXChange, veteran LA DJ Dam-Funk played an hour-plus set of 80s boogie and electro-funk, ranging from the predictable ("More Bounce to the Ounce") to his own self-produced tracks. Unlike most mixmasters, who seamlessly blend (or in the case of hip-hop DJs, jaggedly cut) between tracks, he saw it fit to speak over nearly every transition. This was beneficial in some instances (from the standpoint of a collector of those records, identifying them was a nice gesture), but the constant chat soon grew irksome.

And then it was time for the headliners. Opening with a reworked version of the hymnal "Grace" -- an unreleased curio and fan favorite -- Animal Collective seemed to be in perfect synchronicity with the audience. All of their recent material ("Summertime Clothes", "Guys Eyes", "Lion in a Coma", the abovementioned tracks) were performed in relatively faithful renditions that doubtless placated the new fans, but it was on their more esoteric material -- including a suite of "Fireworks" and "#1" from 2007's Strawberry Jam -- that the band truly shone. Much as the Dead's studio recordings were only springboards and loose templates for their live flights of fancy, Animal Collective indulge the live setting as an incubator of new ideas and spontaneous improvisation, a fearless stance in an era where so many artists merely "play the record", irrespective of genre.

By the time of "Lion in a Coma", a great time had been enjoyed at all. Kudos to Animal Collective and Celebrate Brooklyn for an amazing night of music.
Posted by Sean Murphy at 9:19 AM