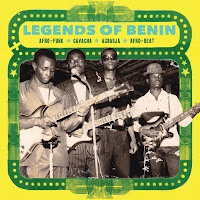 Bordering Nigeria and Burkina Faso, Benin exemplifies the plight of third world nations in the post-colonial era. With half of the population living under the international poverty line (a measly $1.25 a day), the fact that this nation has emerged as a musical hotbed over the past three decades is all the more amazing. After the Kerekou regime began to loosen its totalitarian stranglehold in the late 70s and early 80s, musicians influenced by trends in African-American and Jamaican music were finally accorded the chance to record. These primordial attempts are captured on the recent Legends of Benin compilation, currently a staff pick at Sound Fix Records in Williamsburg.

The richly textured nature of this compilation is quite evident in the programming, which opens with the ersatz reggae-meets-Calling Out of Context Arthur Russell of Gnnonas Pedro, weaves its way into a straightforward early 70s James Brown pastiche -- down to the grunts (El Regno Et Ses Commandos' "Feeling You Got") -- and culminates in the pan-African JB/highlife/juju fusion of Antoine Dougbe's output ("Kovito Gbe De Towe" is the standout here). It's quite remarkable stuff, and unlike other Afrobeat recordings that seem strained by commercial concessions, this is the pure stuff. With the influence of Afropop looming heavily over many of today's most popular groups and the original artists no longer subject to occidential pillaging, it wouldn't be surprising if this compilation elicited a mini-Buena Vista Social Club ripple and brought these artists back from obscurity.
Posted by Sean Murphy at 9:00 AM