More information about It Came From Brooklyn 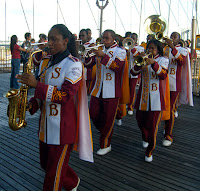 As I reported quite tentatively last month, It Came From Brooklyn is a new monthly program at the Guggenheim that will showcase the best writers and musicians from what is already being heralded as "the Brooklyn renaissance". The first event, scheduled for August 15th, will pair veteran stalwarts The Walkmen with Bed-Stuy-based experimental duo High Places, best known for touring with the likes of Ponytail and Dan Deacon. Rounding out the bill is the BAM-funded, internationally-acclaimed Brooklyn Steppers Marching Band (in a nice acknowledgment that not all of the artistic fecundity in the borough is inextricably tied to the hipster scene) and writers Colson Whitehead (who will be reading some Walt Whitman in between the musical performances) & Leo Allen.

In response to earlier reports about Grizzly Bear having been tentatively scheduled for the event, Guggenheim special events director Bronwyn Keenan said that "Grizzly Bear were never confirmed for August or since. They were the one item on our wish list that had the misfortune of ending up on our website under our 50th activities for literally 24 hours. As it goes, it was picked up as a story and the rest is history." Keenan promises "a great line-up" for the September showcase, so stay tuned.
Posted by Sean Murphy at 4:46 PM