Spank Rock triumph (and nearly get arrested), Built to Spill as dulcet as ever at Siren 2009 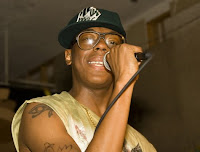 With temperatures hovering in the low eighties and the beach draped in crimson twilight, one could not have asked for more favorable weather at the conclusion to this year's Siren Music Festival. While the pernicious stomach flu kept me from catching some of the estimable (and yes, not-so-estimable) acts earlier in the day, I mustered just enough strength to catch the festival's headliners -- wizened rockers Built to Spill (at the main stage) and Baltimore club outfit Spank Rock (at the cavernous Stillwell stage, adjacent to Nathan's and the boardwalk).

One of the last vestiges of the nineties alt-rock exposition -- like the Flaming Lips, they were granted unusual creative autonomy by Warner Brothers -- the former group melds hallucinatory, Neil Young-via-Guided By Voices guitars to the broodingly ethereal vocals of world's sexiest vegetarian Doug Martsch. Yet their widespread appeal has always eluded me, and the Siren set -- which captured Martsch looking more haggard than ruggedly masculine -- was almost akin to the paint-by-numbers performance of a heritage act. The opening "Liar" and playfully wry "Dystopian Dream Girl" were immediate standouts, and the nature of the free show absolved any complaints of their merit, but it was still fairly underwhelming. That the reverent crowd skewed relatively young was a surprise that still mystifies over a day later.

By and large the most eclectic act of the indie-centric festival, Spank Rock demonstrated that they've still retained their ribald edge some three years after the release of the incendiary YoYoYoYo. Frontman Naeem Juwan has acquired a Sly Stone-like reputation for missing gigs in some circles, and the collective's (an ever rotating line-up ensures that they are not a band in the traditional sense) dearth of new recordings over the past two years left me expecting the worst. Undoubtedly aware of these perceptions, Juwan and company were exceptionally punctual, taking the stage to the strains of B.T. Express's "Peace Pipe" at their scheduled time of 8 PM. Looking more gaunt and emaciated than usual, Juwan was a spectral force at the show, ceding control after the first four songs to local rap legends Ninjasonik and regular collaborator Amanda Blank (whose solo debut I Love You -- co-produced by Brooklyn wunderkind Dave Sitek -- is dropping on August 4th). Clad in one of her trademark black minidresses, the vampish Blank was the unquestionable highlight of the show, exuding a feral presence that only upped the ante for Juwan -- who was subsequently escorted away from the stage by security.

The final verdict? After two lackluster years, Siren seems poised to reclaim its status as one of the nation's finest free music festivals.
Posted by Sean Murphy at 7:12 PM