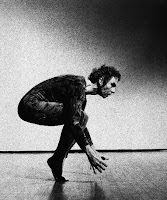 Although he wasn't a musician, renowned choreographer Merce Cunningham -- who died of unspecified causes at his Manhattan apartment Sunday night -- had an indelible impact on the development of experimental music in the late 20th Century. As the life partner of John Cage from the late 1940s to Cage's death in 1992, Cunningham served as one of his most important patrons; concurrent with and after his lifelong collaboration with Cage, Cunningham would choreograph dances to music by David Tudor, Takehisa Kosugi, Gavin Bryars, Mikel Rouse, John Paul Jones of Led Zeppelin, Radiohead and Sonic Youth.

It was only natural that Cunningham's musical palette would err towards the abstruse and experimental. As a theorist, he shared Cage's dogged beliefs that dance and music should be extricated from their mutual underpinnings in other mediums, and frequently applied the I Ching-and-Zen-informed chance operations devised by his companion to his own work. "It's a very easy way to make decisions -- very simple," Cunningham said in a 1998 interview. "If you can't make up your mind about something, toss a coin and then accept it. Accept it." But in spite of these aleatoric leanings, Marc Swed of the Los Angeles Times described him as an "excellent and extravagant storyteller" not necessarily beholden to the Modernist leanings that shaped his early career. Cunningham's approach was eventually validated by the academy with the Kennedy Center Honors and National Medal of Arts, awards that the intractable Cage was never considered for. Throughout it all, the choreographer maintained his trademark magnanimity. When a party acquaintance lambasted Brooklyn-based Mark Morris -- arguably the heir to Cunningham's legacy as the most visible exponent of experimental contemporary dance -- for his rhythmic, music-based work, Cunningham simply rejoindered that Morris was his friend.

Having collaborated with the New York City Ballet, the Zurich Ballet, and myriad other organizations, Cunningham's company developed a close relationship with the Brooklyn Academy of Music in recent years, premiering important new works in 2003 (Split Sides) and 2009 (Nearly Ninety, performed on his 90th birthday) at the Lafayette Street venue. With Nearly Ninety eliciting some of the best reviews of Cunningham's career, it goes without saying that he will be missed.
Posted by Sean Murphy at 8:57 AM