Review: My World by Lee Fields & The Expressions 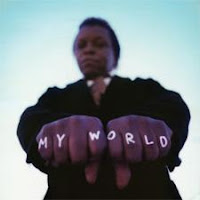 The peripatetic story of Lee Fields is nothing short of a rock and roll cliche on the surface. Emerging in the waning years of the chitlin circuit (a predominantly black network of theaters that included such touchstones as the Regal in Chicago and Harlem's legendary Apollo) in the late 60s and early 70s, the North Carolina-born Fields immediately elicited attention for his gravely, sonorous voice, often likened by neophytes to "a poor man's James Brown". Not only did the Brown comparisons belie melodic gifts that were commensurate to and probably exceeded the Godfather's talents, they precluded him from making any tangible inroads into the music industry -- a couple of ribald singles (1973's "Let's Talk It Over" and 1975's "Funky Screw") notwithstanding, Fields was not coming to a record store near you. Years of relentless touring culminated in the release of Let's Talk It Over in 1979; aside from a tasteful concession to disco ("Wanna Dance"), the album is an anachronistic hodge-podge of mid-60s R&B and primeval uptempo funk (the JBs-esque "Flim Flam", recently sampled by Madlib).

After the obscure 1984 electro foray "Shake It Lady", Fields migrated to Brooklyn and fell off the radar. 1992's Enough is Enough is a risible comeback effort that finds the crooner extemporizing over MIDI tracks, but copies currently fetch upwards of $70.00 on amazon.com -- a direct result of the return to form that began in earnest with Let's Get A Groove On in 1998. As the lodestar of the Brooklyn soul revival, the album paired the venerable singer with a crack backing group (one that would eventually metamorphose into Sharon Jones's Dap-Kings and the ensemble behind Amy Winehouse on "Rehab") that effortlessly repurposed the dynamics of early funk with the verve of contemporary hip-hop. 2002 brought a further refinement of the retro-tinged sound with Problems, and the recent My World -- recorded in conjunction with his latest band, the Expressions -- finds Fields finally on the precipice of breaking through to the mainstream with his best effort yet.

From the scorching trumpet solo in the opening "Do You Love Me" to the heavily arpeggiated guitars of "These Moments", much of My World showcases the technically sophisticated metier of the Expressions, who clearly operate in the lineage of early Philly soul (think The Delfonics). This could be daunting for a gutbucket-style singer like Fields, but as "Ladies" and "Honey Dove" ably demonstrate, his withered voice can still carry a demanding ballad or two. If those tracks are too ersatz-JB for you, be sure to download "My World Is Empty Without You", a lilting leviathan of sleigh bells, Latin percussion, and choral vocals that (un)intentionally recalls the sui generis of Phil Spector. On a handful of instrumentals, the affected nature of the venture threatens to come to the fore, but the timeless nature of the instrumentation -- heavy on punchy horn arrangements, light on the accouterments of bad 70s production -- will keep the listener returning for more.

All in all, My World -- as belated as it may be -- is a validating gesture for the thousands of soul shouters whose outputs have languished in record bins for the past thirty years. Lee Fields is one of the greats, and after a spin of this nugget, you'll doubtless agree.
Posted by Sean Murphy at 9:03 PM