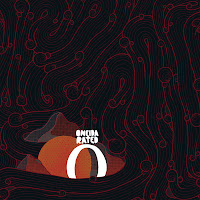 Part of this post is sheer repentance. Since going pro about a year and a half ago, I've relentlessly harangued Brooklyn-based Oneida for their amelodic diffidence. While I tend to favor music with repetitive structures, their faux-krautrock was never appealing to me -- the best tracks were merely odious, while the worst were flagrant emulations of Ash Ra Tempel and Amon Duul tracks that were close to my heart. But on their newest release, Rated O -- a sprawling triple album issued last week on Jagjaguwar Records -- they have crafted their finest statement, a diaphanous mess in the storied tradition of Exile on Main St. and Zen Arcade that somehow congeals into the best Brooklyn-related album of the year.

As many of their contemporaries (from Grizzly Bear to Animal Collective to the eccentrics in Gang Gang Dance) have embraced the trenchant winds of conformity, Oneida have not lost sight of their contrarian cusp-of-the-decade roots, taking their porous inscrutability to new heights here. With so many ensembles burning out and fading away into the depths of the noosphere after an album or two, they've remained steadfastly indefatigable. Like Exile, it is sequenced in genre-pillaging segments of three or four songs. The madcap electro sequence of "Brownout in Lagos", "What's Up, Jackal?", and "10:30 at the Oasis" may be their most confident and exigent work yet, while "The River" and "I Will Haunt You" are room-clearing classic rock mutations that find the band as sprightly as ever. The concluding "Folk Wisdom" stands as both a recapitulation and an invocation to something new.

As accessible as it is prolix, here's hoping that more artists follow in this album's vanguard lead.
Posted by Sean Murphy at 10:05 AM