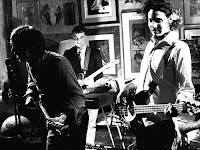 Although they've yet to attain canonical word-of-mouth status, Brooklyn-based Motel Motel may be the best band you've never heard of. While the band prefers to categorize their putatively ramshackle sound as "folk-rock" and often liken themselves to Gram Parsons and Townes Van Zandt, this superficial categorization belies a world of influences that audibly range from The Pixies -- vocalist Eric Engel is Frank Black's misbegotten musical son -- to Tom Waits and the ethereal discord of Talk Talk's final releases.

Boldly schewing the traditionalist streak of most heartland groups, their most recent release -- 2008's New Denver, reissued this week on Rebel Group after a favorably-received tour that culminated in a homecoming performance at the Bowery Ballroom last week -- blends blocks of airy orchestration with rustic plaintiveness and a minimalist lyrical mindset that never strays far from Brooklyn in one of the defining artifacts of the contemporary scene. The epic "Tammy's Bodega" recasts "Where Is My Mind" in the superego's lambent glow, building from a quietly schizophrenic shuffle into an anthemic rocker over the course of seven minutes. "Mexico" is a frontier ballad of the soul that Townes (and possibly Parsons in his Nudie suit/Burrito Brother phase) would have doubtless appreciated, but Engel's pugnacious vocals owe more to the chamber-pop milieu of urban Brooklyn than any singular backwoods force. For iTunes/eMusic enthusiasts, the lightly-orchestrated "Virginia" reins in the group's more eccentric tendencies, delivering veiled optimism in the sanguine hue of the Flaming Lips. Whether you like them or loathe them, it seems that Motel Motel have already escaped the stylistic cul de sac that has ensnarled so many of their peers.
Posted by Sean Murphy at 1:21 PM