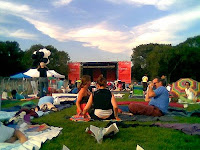 Although midsummer is rapidly approaching, there are still many free -- and local -- performances that can quench your musical thirst in these tough economic times. Here are some of the more intriguing selections that I have yet to cover here.
Met in the Park:

Coffey Park (Red Hook)
Friday, August 14, 2009 at 7 p.m.
Joyce El-Khoury, soprano ; Keith Miller, bass; Vlad Iftinca, pianist; Damon Gupton, host
No, it is not a full-scale Metropolitan Opera performance, but the opportunity to see two of the world's finest opera singers in a Red Hook park should not be disavowed. The repertoire is still TBA, making it even more of a delectable surprise.
CityParks Foundation:
Red Hook Park & Recreation Center
Tuesday, August 18, 2009 at 7 p.m.
DJ Premier, Pete Rock, Danny Castro
One of the seminal figures of contemporary turntablism (Premier) teams up with underground hip-hop's finest producer (Pete Rock) for what should be an exhilerating performance.
Brower Park (Crown Heights)
Wednesday, July 29, 2009 at 7 p.m.
Wayne Wonder
The progenitor of reggae/dancehall's cross-pollination with R&B earlier this decade, Wayne Wonder was an important influence on Shaggy and Sean Paul. You may remember his 2003 hit "No Letting Go".
Marty Golden's Summer Concert Series:
Shore Road Park (Bay Ridge -- 79th Street entrance)
Tuesday, July 28, 2009 at 7 p.m.
France Joli
Best known for her 1979 hit "Come to Me", France Joli -- whose career received an unanticipated boost when she was asked to fill in for Donna Summer at a Fire Island party -- was one of the last disco divas.
Posted by Sean Murphy at 7:39 AM