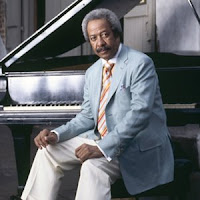 You've probably never heard of him -- or you're only familiar with him in conjunction with his post-Katrina activism and ensuing collaboration with Elvis Costello -- but New Orleans R&B legend Allen Toussaint is one of the most influential figures in 20th Century popular music. An eminence grise of the highest order, it was Toussaint who discovered the Meters in the late 1960s, giving generations of hip-hop producers hours of pliable samples to work with; later on, his production of LaBelle transformed the trio from Laura Nyro's background singers into sultry disco divas. When The Band found themselves at an artistic crossroads in 1971, guitarist Robbie Robertson called in Toussaint to provide horn arrangements for the funky "Life is a Carnival", leading to an expanded collaboration that culminated in Toussaint writing horn charts for the group's live set, as captured on 1972's Rock of Ages. And if I don't sound sententious enough, his earlier work for the likes of Lee Dorsey -- including the original versions of "Working in the Coalmine" and "Yes We Can", later popularized by the Pointer Sisters -- kind of renders the rest gravy.

On June 11th, Toussaint -- who has spent quite a bit of time in New York since Katrina devastated his city -- will be opening the free 15th annual BAM Rhythm & Blues Festival at MetroTech. Since the free show is at noon, it's a great lunch option and something to do for those singing the recession blues. The concert series, which continues until August, will also include performances by the likes of the Spanish Harlem Orchestra and the Rebirth Brass Band. Check it out!
Posted by Sean Murphy at 10:00 AM