Preview: Church of the Haunted South by the Winter Sounds 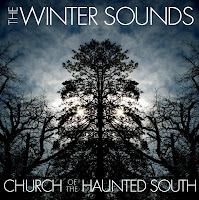 Artist sobriquets and album names are seldom reflective of actual product in the 21st Century. The Winter Sounds have decisively bucked this trend, for while you would expect a group of road warriors (they played 217 shows in 2007) from Athens to be fazed by cold weather, their ethereally plangent songs will leave those of us disinclined towards summer yearning for lost love, echoey guitars, or whatever the winter conjours up for you. Veterans of such estimable local venues as Trash, they have forged a sound that as wistful as it is ebullient -- a rare feat these days. While we wouldn't want to spoil the album for you (it's due on July 7th), lead single "Trophy Wife" applies Beach Boys harmonies and angular guitars to an eighties alt-rock beat -- the voice of the outsider set to music if there ever was such a thing. As indie becomes the next corporate behemoth, support a true alternative group.
Posted by Sean Murphy at 12:59 PM