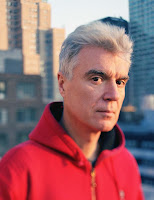 Since divorcing longtime wife Adelle Lutz in 2004 and relinquishing day-to-day operations of his record label, Luaka Bop (one of the standard-bearers of "world music"), onetime Talking Head David Byrne has become a prolific and indefatigable presence in the contemporary music scene. In addition to scoring hit HBO drama Big Love, he's designed bike racks for the City of New York (Byrne is an avid cyclist), turned an entire building in lower Manhattan into an interactive musical installation, maintained one of the best blogs on the Internet, and guested on every other record coming out these days (including the BPA's "Toe Jam", which you probably remember as that slightly risque viral video sensation from last year). As if that wasn't enough, he mended his friendship with producer Brian Eno, who took the Heads to a creative apex on Remain in Light; the duo's recent album, Everything That Happens Will Happen Today, is a gospel-tinged effort quite uncharacteristic of either musician's oeuvre (though it is close in spirit to Eno's classic Another Green World).

In support of Everything... Byrne has been touring relentlessly with a stage show centered around compositions written with Eno, including a smattering from the new album, the duo's experimental 1981 release My Life in the Bush of Ghosts (an important progenitor of hip-hop & world music), and the Heads' classic tryptich of More Songs about Buildings and Food, Fear of Music, and the aforementioned Remain in Light. On Monday, Byrne will bring his show to Brooklyn as the opening concert of the annual Celebrate Brooklyn series at the Prospect Park Bandshell (F/G to Seventh Avenue; R to 9th Street). Although the suggested donation is $3 for a space on the lawn as always, seating will be reserved for ticketholders of a preceeding gala benefit. Naturally, these are rather steep at $325 and up -- although if you are lucky enough have some money to blow, the ticket includes a meet-and-greet and a postshow dance party (probably not including Byrne, who at age 57 is still one of the most intense performers in the business). Brooklyn Music will be there with photos and a postshow wrapup.
Posted by Sean Murphy at 11:05 AM