Loud, Fast, and Out of Control: The Coney Island Rockabilly Festival 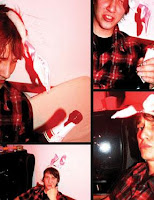 Although I'm a college student and probably blissfully unaware of some aspects of Brooklyn's musical past, from what I do understand, this was more of an R&B and doo-wop town than a rockabilly mecca back in the 50s. Nevertheless, since the Cramps released the Alex Chilton-produced Songs the Lord Taught Us in 1977, the genre -- not to mention an associated subculture of hot rod enthusiasts, Bettie Page-loving vamps, burlesque performers, and other connoisseurs of weird -- has enjoyed a steady international revival. (The pedant in me would like to remind people that aside from some unusual proclivities, the late Ms. Page was a Baptist in good standing with little to no interest in rock and roll -- indeed, her career preceeds the rock era -- while latter-day burlesque performers were usually backed by jazz musicians. That said, cultural syncretism and revisionist history can be quite interesting if rendered tastefully, and most of these 50s revivalists are very dedicated to their craft.)

If neo-burlesque, twangy vocals, and doghouse basses are your thing, the third annual Coney Island Rockabilly Festival is most certainly for you. Sponsored by local businesses like Gretsch Guitars and Coney Island Lager for a change, the festival -- centered around legendary Cha-Chas on the boardwalk -- will play host to over 20 bands over Labor Day weekend. Arguably the centerpiece of the festival, the Big Burlesque Blow Out on September 5th will feature such local talents as La Maia, statuesque newcomer Magdelena Fox, and Public Assembly regular Coco La Pearl. Among the local bands being showcased, Guitar Bomb's bluesy music recalls the earlier efforts of the White Stripes and the Von Bondies, albeit with extra twang (catch them at rockabilly haven Hank's Saloon on August 14th for a preview), Rockets Red Glare are straight-up psychobilly, and... uh... Brooklyn electro DJ duo Designer Drugs are ostensibly soundtracking the Miss Pin Up Coney Island contest on Labor Day proper; hopefully I'm completely wrong here. (There is a rockabilly group out of Boston using that moniker, but as far as I know, they haven't relocated to enemy turf.) By the way, I love Designer Drugs, but the idea of them playing a rockabilly festival is just a little incongruous. In any case, there will also be a performance by the world famous Coney Island Sideshow augmented by extra burlesque performers on September 4th.

While it would be nice to see some more local performers, kudos to Cockabilly Records and their partners for keeping Coney Island weird (to paraphrase Austin's anti-gentrification slogan) during this period of transition. That this festival is entering its third year is a testament to the fact that people from all over the world love the seaside neighborhood just the way it is, a message that will hopefully reach the suits at Thor Equities.
Posted by Sean Murphy at 8:29 AM