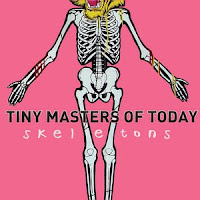 In what other era could a band of putatively hep 13 year olds set off a firestorm of accusations and recriminations in the blogosphere? Along with fellow tween-scenesters Care Bears on Fire, it's easy to lament Park Slope-based duo Tiny Masters of Today for the excessive and stagey misparenting they're doubtless subjected to on a daily basis -- while it's natural for a kid to want to strum a guitar and play the talent show, Leia Jospe photo shoots with Karen O and a major-label recording deal are something else altogether. Since it seems that the Tiny Masters' parents at least have the temerity to let their children lead relatively normal lives, their sophomore album was released to general ennui and indifference at the beginning of the month. That is, until Pitchfork staff writer and wizened music blogger Matthew Perpetua deigned to give the Brownstone Brooklyn upstarts' latest sacrifice a 3.0 (out of 10.0) on the site's overly quantitative rating scale, citing their "self-conscious kiddy variations on vaguely arty strains of punk and alt-rock" and the lack of "practical use for this music besides causing adults to go, 'awww, cute!'". And yes, in a statement that may well have been the most opprobrious thing I've read all year, he chided the twosome for their "predictably banal lyrics". (Literary rant of the day: uhm, Matt... as precocious as these kids may seem on the surface with two records behind their belt and all, they are still kids. Since you evidently value the praxis of poesis over chord progressions, taut production, and having a good time -- like most outmoded music critics -- please do the literary community a favor and write an 800 page onanistic treatise on mimetics in the work of Robeson Jeffers or something.) In any case, all publicity is good publicity, and you can see the Tiny Masters rocking out at Coney Island's Siren Festival next month. (More details, including the full schedule lineup, will follow tomorrow.)

Leadoff single "Skeletons", while somewhat too derivative of past tidings and callow in the way that any major-label production looking to cash in on the Brooklyn scene is going to be, may actually be more listenable than anything (save for that recent "Genius of Love"-ish YACHT single on DFA) gracing Pitchfork's Best New Music list right now. It may even be the first reification of the art rock backlash that's going to ensue in a couple of years, when teenagers of the Tiny Masters' vintage decide that the fetid retroversion of many of those groups is as happening as that quaint relic known as the iPhone. It is in this revisionist environment that their angular guitars and grime-influenced backdrops will inspire a new generation of malcontents. Invest in these Tiny Masters, and invest in the future.
Posted by Sean Murphy at 6:48 PM