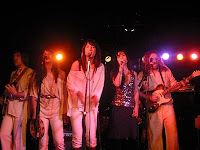 The Phenomenal Hand Clap Band is one of the most buzzed about outfits of the year, and for once, it seems the hyperbole may be justified. On their debut album (a first only in the sense that this particular aggregation of musicians has never recorded together; as an earlier post last week detailed, these are all veteran musicians), the Hand Clap Band exploits the alembic of the sound studio to blend late 70s italo, Sugarhill Gang-era hip-hop, Philly disco, neo-soul redolent of Sharon Jones, Hendrixian funk-rock, and God knows what else in to one of the more ingenuous sounds of the decade. Since indie's ascendancy began in earnest three or four years ago, we've had to contend with the usual stereotypes (TV on the Radio and the Carps notwithstanding) of willowy prep school musicians playing music for, well, other willowy prep schoolers. The Hand Clap Band is by far the funkiest group of whites assembled since the Average White Band -- and that's intended as a compliment. (The Remain in Light-era Talking Heads don't really count, obviously.) Just as Living Colour and a new generation of "Afropunk" bands have demonstrated that rock isn't always the province of whites, the PHCB can get down quite well.

A catchy opener, "The Journey to Sella De Estrada" effortlessly evokes the cheap disco-influenced soundtracks that Justice routinely plunders; after not overstaying its welcome, the final strains segue into "All of the Above", a sort of discofied take on the San Francisco sound of the late 60s. "You'll Disappear", currently immortalized in local nightlife legend as a 12-minute Moroder tribute, is halved and quartered here, but the unexpected opening salvo of that one-two opening punch more than compensates for what sounds like a failed experiment. Side two is a miasma of downtempo explorations; being more familiar with their pulsating disco oeuvre, this is still sinking in. But it sounds quite promising.

All in all, if you feel compelled to buy a new album this week, check this baby out. My divagations don't do it justice.
Posted by Sean Murphy at 10:18 AM