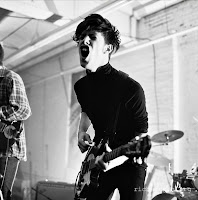 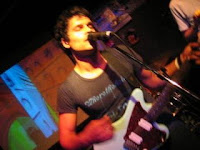 Full disclosure: I've known Jack Lesser since the tail end of eighth grade, when we were the requisite misfits in our Brooklyn Tech orientation group, and I was also present at the Mighty Handful's first rehearsal over a year and a half ago -- salient facts which probably make me the most authoritative and least qualified person to write about them. Since they boozed on the scene in late 2007, the Handful have created a niche for themselves as Brooklyn's raggedly glorious answer to Crazy Horse and the Replacements -- you see them for the camaraderie, for Jack and Hank Crawford's guttural Charley Patton screams, for the bromantically pugilistic qualities of rock and roll lost upon a generation of art school aesthetes. That all of the founding members of the Handful could pass for members of the latter group and include one decent artist -- bassist Tola Brennan -- among their ranks makes the whole situation deliciously subversive. As I've remarked to more than one person, "They look like Arcade Fire or Beach House, but they're really the latest incarnation of the Stones in drag, a 50s R&B revue with crypto-disorted guitars and a funky drummer..."

Emerging from the same fecund Park Slope teen rock scene as noise-rockers Fiasco (the anti-Handful; naturally, the two bands enjoy a synergistic Television/Ramones-esque relationship) and Radiates, the Handful have maintained a brutal underground ardor as the likes of Spin and Pitchfork solicit articles about the former band, playing the last punky vestiges of the all-ages circuit and getting banned from a venue or two. With all of the members going off to college this fall -- Jack deferred from SUNY Purchase for a year and worked as a legal receptionist, which seemed oddly appropriate -- and side projects on the rise (Jack has a new band, Tola is writing 8-bit chip music, et cetera), their future is uncertain. But as any fan of the band will tell you, it's that kinetic ambivalence which makes them so exciting in the first place. When 90% of the Brooklyn scene is content to indulge in the pro forma professionalism of a road-weary jazz combo, the Handful remind you that it's only rock and roll. Band members are late, gear is missing, Jack is sick... but the show always goes on, sometimes miraculously. Implosion, I have learned, can be a beautiful thing.

This is precisely what happened on Friday night at Public Assembly in Williamsburg. The Handful were playing in the pomo Dick Clark thrall of an all-ages matinee; needless to say, the promoter was rather diffident about the whole affair and didn't particularly care as I stood outside with Jack, Tola, & Mark DeNardo of Graffiti Monsters (also on the bill) and shot the breeze for a while. Although his flair for self-promotion arguably exceeds that of Jack and Hank -- he played a favorably-received set at SXSW, for example -- the colorful DeNardo shares their affinity for keeping it real in the rapacious indiesphere. With Grafitti Monsters, Mark, a couple of drummers, and a Game Boy player have combined his lifelong penchant for aggresive punk with chic 8-bit and electronic/Dan Deacon-y flourishes. Although I only caught the tail end of their set on Friday, they are certainly worthy of your attention in the future. Check out http://www.myspace.com/graffitimonsters and http://www.markdenardo.com/ for tunes, videos, and pics.

With keyboardist/resident Brian Eno Jack Greenleaf indisposed along with the horn section, the concert promised to be the Handful at their barest, always a delectable treat. Alas, Felix Walworth -- the aforementioned funky drummer -- was running late on the ever-unreliable G train, leaving Jack and Hank to prevaricate with headliners Shapes and various other musicians to bide some extra time. Arriving in the nick of time, Felix landed on the drum throne with the usual gusto, and the Handful did not let broken guitars and borrowed amps diminish what was easily the most powerful rock and roll performance I have seen yet this year. Although Hank grumbled about being off-key afterwards, the Handful on a bad day beat most professionals on a good day. Dark and lambent, contradictory to the core, one certainly hopes that the Greg Shaw of a future generation will put out some sort of documentation in the intervening years if the worst happens. And if they do indeed make it... well, rock and roll is here to stay after all.

The Mighty Handful are playing Hillstock with a billion other DIY bands at 967 Bergen Street on Friday. Catch Grafitti Monsters at Union Hall on June 11th.
Posted by Sean Murphy at 12:36 PM

Labels: show review, the true saga of the mighty handful