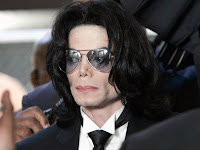 Despite being a risible laughingstock in his final years (like an earlier King), it seems that death has finally put Michael Jackson into perspective as a tortured soul who didn't ask for the Faustian bargain that was his life. Admittedly, this is one of those tangential posts, but Jackson's music has had such a profound impact on the pop sphere over the past forty years that I would be remiss not to say something.

In any case, while the early hits of the Jackson 5 and the multi-platinum triptych of Off the Wall, Thriller, and Bad (we'll forgive Victory) are thoroughly ingrained into the collective American unconscious and likely will be for decades to come, the Jacksons' mid-70s funk/disco output stands as some of MJ's best work. Working in close conjunction with trenchant producer Norman Whitfield, a meglomaniacal talent on par with Wilson and Eno who previously brought the Temptations into the psychedelic era with "Cloud Nine" and "Papa Was A Rolling Stone", the Jacksons successfully transitioned from a pubescent bubblegum act into one of Motown's most credible dance groups. The "ABC"-esque "Dancing Machine" was the big radio hit from this period (be sure to download the LP version, which is vastly preferable to the sterile single edit), but b-boys at Bronx and Brooklyn block parties preferred to groove to the eight minute "Hum Along and Dance", a funky, dubbed-out excursion from 1974 that looks back to psychedelia (dig the Ray Manzarek-like organ) but points forward to the metronomic rhythms of electro. The seven-minute "Mama I Gotta Brand New Thing" is another Whitfield funk tour de force, pairing materialist lyrics and a prominent Jackson lead with acoustic guitars, blippy synthesizers, and dollops of reverb.

On the more disco side of things, both "Get It Together" and "Forever Came Today" (a cover of an earlier Supremes classic) were local underground club mainstays for years. The former cut was popularized by Brooklyn DJ Nicky Siano at his early Gallery parties in SoHo, while the latter particularly resonated with the legendary Larry Levan, who reportedly performed an hour-long mix of the song at the vanquished Paradise Garage on several occassions. (Levan was quite fond of playing his personal favorites over and over again, which may account for this legend.)

Rest in peace.
Posted by Sean Murphy at 7:46 AM