Crate Dig goes to Park Slope: Sounds of the Slope (1980s?)/Update on Record and Tape Center 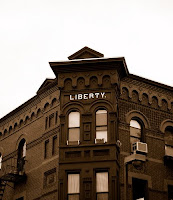 Until they closed a few years back (in 2006, as I recall), Park Slope's Sound Track Records was one of the borough's finest purveyors of those near-obsolescent plastic discs known as CDs. (I don't recall much vinyl, although all of the extant evidence suggests that they were one of the last holdouts before the resurgence of the late 00s.) Their selection of cassettes (even more obsolete, naturally) was probably unmatched in the entire tri-state area after Tower Records closed; indeed, my father -- whose distaste for the nabe's perceived air of hoi polloi and perambulating strollers was well known -- would occasionally drag me there after an afternoon at the Central Library, scouring the racks for a coveted copy of Television's Adventure. He rarely bought anything, but it was always fun.

Alas, old miserly enthusiasts like my dad were the kind of people who inadvertently took Sound Track out of business, leaving Record and Tape Center on the corner of 5th and 9th as this music junkie's main dealer when I was working at the Central Library in high school. Whereas Sound Track halfheartedly attempted to modernize, the owner -- a crotchety neighborhood legend by the name of Tony -- continued to preside over a dimly-lit melange of soul/funk/disco LPs, Laurel & Hardy DVDs, and loose $1 Prince CDs... someone's idea of a culture junkie's dream. Although going away to college and the mp3 revolution have precluded me from visiting Tony's cramped record shack, I try to make a point of visiting at least once a year. As the dearth of record stores in Bay Ridge and the Heights fully attest, when you lose a cumudgeonly holdout like Tony, the neighborhood loses a more than a slice of its vibrancy.

Thus, I was quite disheartened to read reports in the Brooklyn Paper (cough) and numerous blogs a couple of weeks back stating that Tony's venerable shop was scheduled to be evicted in late June, the end result of an overzealous landlord. Tony -- full name, Tony Mignon -- vowed to remain in his space, and the ornery guy succeeded... in a left-handed way. According to recent reports, the store is moving down the block to a new space -- leaving one of the city's best sources for used vinyl in business.

Which leaves us with Sounds of the Slope. Long before the neighborhood became a mecca for displaced Manhattanites, emigre trendoids, and baby clothing boutiques, Park Slope was just another working-class South Brooklyn neighborhood -- the kind that artists naturally gravitated to for its low rents and quiet atmosphere. Native sons (and daughter) the Shirts, one of the semi-forgotten bands that played alongside the Ramones and the Talking Heads at CBGBs, used to hang out with Greenpoint blues band Rice Miller on Ninth Street, as I wrote about in a Music Junkie column next year. With that in mind, I was hardly surprised to find this vintage record -- released by the enigmatic "Sound Track Records", and release no. number 19 (!) to boot -- while digging through my girlfriend's father's record collection this weekend. Along with the band Ninth Street, the mysterious anthology includes recordings by a number of folk, punk, and new wave groups.

So... any reminisces of the Seventies/Eighties Park Slope music scene? And how many more of these privately-pressed Sound Track anthologies are floating around out there? Feel free to comment.
Posted by Sean Murphy at 9:16 AM