Local bands give jam bands improbable tip of the hat 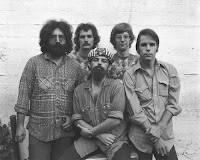 Since punk and hip-hop dovetailed to make 1976 the year zero of contemporary pop, the Grateful Dead and the "jam band" subgenre they spawned have enjoyed a canonically tenuous presence among critics and musicians. (The public being the odd exception -- between 1987 and 200, the Dead and standard-bearers Phish reached their commercial zenith and regularly sold out arena and stadium shows.) Iconoclastic, insurgent, but never fashionable, these bands constitute the subversive apocrypha of vernacular music, a Mirror Universe where collective virtuosity trumps lyrical vision, syncretism is style, and the more hubristic aspects of the 60s remain as alive and well as ever.
But with many of the more inventive pop alchemists of the past five years or so quite fond of jamming out and juxtaposing dissimilar influences, something had to be at work. In an article discussing the indie-hippie collusion in Relix magazine (originally a Brooklyn-based publication in its original 70s incarnation as a Dead fanzine), members of such Brooklyn-based bands as MGMT and Animal Collective discuss their admiration for the je ne sais quoi of the jam, the Dead's oeuvre in particular. As Geologist of the latter group notes here, "people seemed to welcome you and the community didn't feel exclusive." Of course, with Sonic Youth having gone on record with their (highly circumspect) approval of the Dead years ago, not to mention Husker Du's cover of "Eight Miles High" and 14-minute finale on Zen Arcade, this is something along the lines of old news. But it doesn't hurt to remind people that all music, at the end of the day, is pretty similar.

The Dead, for the record, played at the 46th Street Rock Palace -- a decrepit 30s movie palace converted by avaricious promoters -- with Hot Tuna in Borough Park in late 1970.
Posted by Sean Murphy at 2:58 PM