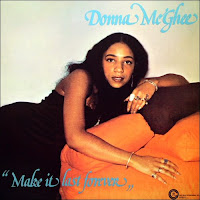 Another find in the bins at Academy. Long due a reappraisal, Donna McGhee is a Zelig-like presence who toured or recorded with the likes of Chaka Khan, Teddy Pendergrass, the Fatback Band, and numerous Patrick Adams ventures in the halcyon days of disco. Blessed with a urbane, azure tone that blended well harmonically and owed little to the gospel-derived histrionics that were in vogue among lead vocalists at the time, she was seldom accorded the opportunity to record in her own right. One of the few extant examples of her artistry (Adams's productions were quite meticulous by disco standards, and we can only wonder if discarded tracks or scratch vocals by McGhee for his seminal "Weekend" are lying around in a vault somewhere), Make It Last Forever (1978) is a periplum for a sound that never was, blending debonair orchestral funk and gritty guitars redolent of Stax Records with McGhee's louche vocals. As the progenitor of "sleaze disco", the downtempo title track was a significant underground hit, enjoying early-morning play in scores of pre-Giuliani all-night dance clubs throughout the boroughs for years to come. (Nevertheless, many purists will cede to disco-funk outfit Inner Life's relatively concurrent recording of the song with diva Jocelyn Brown; an unreleased remix of this version by Larry Levan, adding proto-electro flourishes, has been described as the venerated SoHo DJ's secret weapon.) No less significant is "I'm A Love Bug", a fairly crass sellout attempt in the tradition of Marvin Gaye's I Want You that nonetheless retains more charm than, say, "I Love the Nightlife". (Along with "Make It Last...", it was excavated for the popular Deep Disco Culture series a few years back.)
After a moderate hit with "You Should Have Told Me", remixed by freestyle wunderkind Jellybean Benitiz, McGhee promptly fell off the radar for several years. Her MySpace indicates that a new album is in the works, but in the meanwhile, delve into some of the deepest disco ever recorded... gauche cover typesetting not included.
Posted by Sean Murphy at 1:58 PM