It Came from Brooklyn! (Or Washington D.C.) 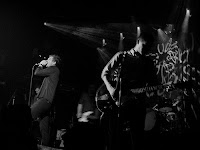 This has been floating around for a while, but worth a reminder on this very slow news day. Popular rock -- which is not to say noisy esoterica patronized by the most important visual artist of his era -- and highbrow art museums began to converge in 1968, when the psychedelic miscreants of Jefferson Airplane played a benefit for the Whitney Museum in the cultural space's hallowed halls. (How Paul Kantner -- one of San Francisco's greatest bastions of civic pride -- was corralled into playing such a show remains unknown.) In any case, the historical ossification of what an accompanying press relesse has termed "the Brooklyn renaissance" will continue on August 14th, when elder stalwarts the Walkmen and High Places will open the Gugg's "It Came from Brooklyn" series, which will then continue for the next five Fridays. The concerts will be accompanied by readings from notable Brooklyn writers, all of whom are TBA at this point. Price is also TBA, but seeing as Grizzly Bear -- the original scheduled headliners -- backed out (they're playing a freebie two weeks later at East River State Park), we can assume that the performances will be gratis with admission. While the whole "50s sci-fi kitsch" ardor of the title is just short of condescending ignorance (this ain't exactly the sticks), it's great to see local acts being featured in one of the nation's preeminent museums and further evidence that Brooklyn is the place for innovative contemporary pop.
Posted by Sean Murphy at 9:55 AM