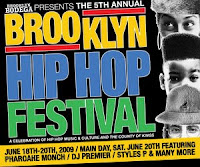 While lacking the pizazz of last year's eclectic old-meets-new school lineup, tomorrow's 4th annual Brooklyn Hip-Hop Festival (held in Empire Futon State Park in DUMBO) is sure to delight hardcore adherents of the genre. Veteran Tallahassee-based political rap duo Dead Prez is headlining a connoisseur's program of nascent, female, and thoroughly underground acts including Tye Phoenix, Tanya Morgan and Children of the Night -- all as divorced as one could possibly get from Lil' Wayne and T-Pain in the midst of the autotune era. Tickets are available at the link above for a mere $10 -- a bang for your buck on par with Todd P. indie shows -- but be forewarned: having attended last year, I can vouch for tight security, long lines, and the annoying rumble of D, N, and Q trains traversing the Manhattan Bridge. But with a relatively esoteric program this year, the festival may be worth checking out.
Posted by Sean Murphy at 8:40 AM