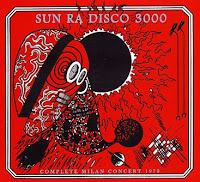 With a plethora of record stores in Brooklyn, odd things invariably wash up. Each week, Crate Dig rescues a dusty slab of overlooked vinyl from the bins. This week, we look at avant-garde jazz impresario Sun Ra's Disco 3000, found at Academy Records in Williamsburg.

Like Captain Beefheart, Tom Waits, and even Frank Zappa, Sun Ra was and remains a figure whose veneration and critical cachet has always exceeded any conventional notions of popularity. By far the most outre performer to ever appear as a musical guest on Saturday Night Live, Ra (nee Herman Blount) and his Arkestra big band drew upon the cacophony and clangor of free jazz but never lost sight of swing's rhythmic foundations. All the while, the band foregrounded their use of electric -- Ra was an early devotee of the portable combo organs popularized by 60s garage bands -- and electronic instrumentation, relative exotica that only served to emphasize the Arkestra's penchant for Egyptological themes. Long before George Clinton and the P-Funk collective submerged their cliquant funk in Star Trek-influenced self-mythologizing, Ra -- who claimed that he was a messenger from Saturn and had experienced contact with extraterrestrials some 10 years before the Roswell incident, a story that even his closest associates found to be spurious -- and the Arkestra explored science fiction tropes as a metaphor for the plight of African Americans and, inferentially, gays. (Ra was nominally homosexual, but most evidence suggests that he was a functional asexual, perpetually shy and consumed by the rigors of touring & composing.) By the 1970s, however, Ra distanced himself from black power and black nationalism even as the Arkestra remained primarily black, claiming that all people were "puppets and pawns of some greater force"; interestingly, the Arkestra -- which received reviews from the hippie press that ranged from extremely desultory to mildly bemused -- enjoyed a modicum of popularity as SoHo's experimental loft jazz scene began to coalesce, culminating in the national exposure of the SNL performance.

Recorded live in Italy around 1977, Disco 3000 -- the title mocking the percieved futurism of late-period disco -- captures the mature Arkestra at its absolute zenith. Having integrated synthesizers, female dancers, and conservative use of drum machines into their arsenal, with Ra's personal set-up alone extending to three keyboards, the reductionist would merely classify them as a thinking man's agitprop P-Funk. But even as the stage show grew more elaborate, the music -- as minimalist as it was discordant on earlier releases like Atlantis, essentially presaging the no wave/new music fusions of Rhys Chatham and Glenn Branca -- is a cornucopia of sound here, evoking the metal-tinged avant-garde jazz-funk (how's that for critical largess?) of Miles Davis's mid-70s ensemble in its ingenuous exploitation of unusual timbres (rest assured, the drum machines do not sound like drum machines) and coruscating harshness. For jazzers well into middle age, this is intense music, setting a precedent for the continued activities of Chatham, Branca, Lydia Lunch, and Sonic Youth today. As with Davis's live albums of the epoch, the song titles are fairly arbitrary, although hints of standards like "We Travel the Spaceways" and "Geminology" can be discerned in the primordial ooze.

Shortly after this recording, the Arkestra would decamp to Chelsea, where their celebrated engagement at the Squat Theater would draw various members of the avant-rock cognoscenti (John Cale, Nico) as the effects of their innovations began to be felt in rock music. Sun Ra would continue to record and tour until his death in 1991; a reconstituted Arkestra has continued to tour in time-honored jazz tradition, spreading the gospel to a new generation of jazz aficionados .
Posted by Sean Murphy at 9:50 AM