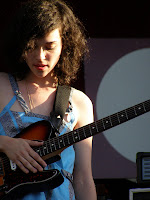 St. Vincent (nee Annie Clark; not to be confused with the namesake of some three dozen towns in France, a small Caribbean nation, and the logarithm pioneer) has garnered quite a bit of justified acclaim since embarking on a solo career three years ago. (Cognoscenti know her from her previous efforts with the Polyphonic Spree and Sufjan Stevens earlier in the decade). As many contemporary indie popsters value pristine Wilsonian production and grandiloquent (cough... proggy... cough) song structures over the rock and roll heart that characterized forebears like Guided by Voices, Clark's songs are elliptical, jagged, prolix, and even discordant at times -- try to picture a punkier Joanna Newsom and you have the basic idea. (Her album covers, on the contrary, are wretchedly bland, but who's to judge?) An ideal fit with British doom/gloom indie 4AD (also home to elder statesman Scott Walker and the Cocteau Twins), her recent Actor is already destined to top end-of-the-year lists while exposing her songcraft to a new audience. On July 24th, Clark -- a resident of Brooklyn -- will be swinging through her hometown for her inaugural Letterman appearance, followed by a just-announced show at the Bell House on Thursday. With comparable acts now charging upwards of $25, the $10 advance/$15 door price is nothing to scoff at either. Check this one out!
Posted by Sean Murphy at 9:28 AM