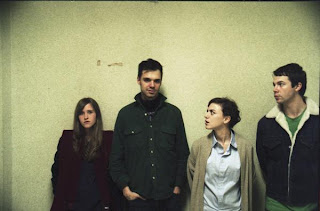 In a not entirely surprising development, Grizzly Bear have eked their way into the Billboard Top 10 (#8, to be precise) with the well-received Veckatimest, selling 33,000 copies in the first week of release alone according to the Los Angeles Times. This improbably places the Brooklyn quartet alongside Eminem, Green Day, and other sundry commercialized pap at the forefront of American music, quite startling considering that preceding effort Yellow House has sold a mere 55,000 copies to date. Chalk it up to frontman Ed Droste's pugnacious Twitter observations (which have become a sensation in their own right), a wave of sympathy that followed the album's unexpected leak in March, and just plain old talent (even if we were rather lukewarm about the album here, it still beats Eminem's crass lyrics and tepid Nineties beats any day... but we're not even going to dignify Green Day, no siree). In any event, congratulations!

Back in the early Noughties, the Dirty Projectors served as one of the crucial antecedents for later groups like Grizzly Bear, divorcing alternative rock from its post-grunge affectations and infusing something all the more ethereal. If you ever wanted to see them close up, especially after their showstopping turn at Dark Was the Night with David Byrne last month, here's your chance. Limited copies of their latest and greatest Bitte Orca will include 1 ticket for an in-store performance at Williamsburg's venerable Other Music on June 19th. These will undoubtedly go in a matter of hours, so run over there on June 5th at noon to take advantage.

Meanwhile, dates for the free Williamsburg Waterfront "pool party" concerts (the latest iteration of the popular McCarren Park Pool shows of recent years, as discussed in a Music Junkie lamenting the pool's closure last fall) are slowly trickling out. On July 12th, wizened postpunks Mission of Burma will be heading a bill with Baltimore aggro-noisepunks Ponytail (late of next week's Northside Festival and many, many local shows), while August 3rd will bring the trifecta of Dan Deacon, Pitchfork darlings No Age, and Deerhunter's neo-psych extravaganza. All gratis, so get on out there!
Posted by Sean Murphy at 12:19 PM