The Orb flake out... again 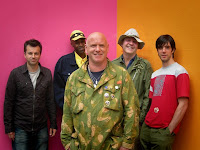 Although you wouldn't know it from the faux-dishabille of his army jacket, rotund potbelly, and old geezer-y countenance, Orb frontman Alex Patterson was one of the coolest guys of the 1990s. In case you don't remember, the Orb (best known for their Ricki Lee Jones/Steve Reich-sampling hit "Little Fluffy Clouds) stood at the forefront of ambient techno, perhaps the most buzzed-about genre of the decade that never really congealed into a cultural movement. Nevertheless, their hallucinogenic live shows were quite influential in exposing rockist snobs to the merits of electronic instrumentation -- LCD Soundsystem's James Murphy has cited a mid-nineties performance at Roseland as one of the more revelatory experiences of his life -- while Patterson enjoyed his 15th minutes of fame: the Orb promoted their single "Blue Room" on Top of the Pops in 1994 by playing chess with each other (a rebuke of sorts to the show prohibiting groups from singing or playing their own instruments), and The Orb's Adventures Beyond the Ultraworld is still remembered as a classic in critical circles.

However, myriad line-up changes, changing tastes, and numerous other factors have consigned the Orb to a dwindling fanbase in the 2000s. It probably doesn't help that they tour only sporadically in America -- for example, their last scheduled NYC performance in 2006 was canceled under mysterious circumstances. And it seems that their latest visit, scheduled for July 10th at the Music Hall of Williamsburg, has met the same fate. At least we'll always have the records...
Posted by Sean Murphy at 10:22 AM